Square's office is enveloped by wall-mounted monitors. I'm sure they usually display some interesting charts, but they're automatically blacked-out the moment a guest like me arrives. In typical Square fashion, they're not merely turned off: they display an elegant black Square logo on a dark textured background.

However, there was one near the entrance still displaying Twitter's Feed widget with tweets about @Square. Stretched across the screen, ceaseless praise about their products scrolled by in an interface not too dissimilar to this: 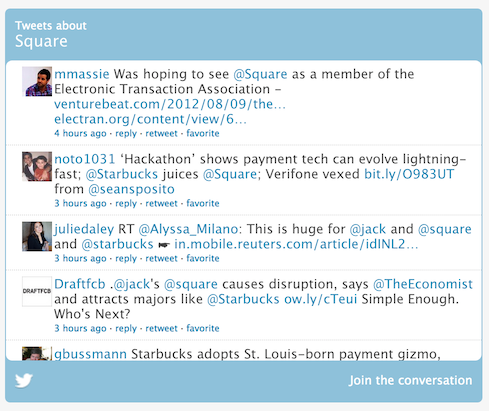 I was speaking to some folks nearby, when someone looked up to the monitor and rendered that squinting expression when you first notice a scratch on your car. He uttered: “Wow, that makes us look really bad.”

Everyone turned to the newfound blemish. He continued: “I'm going to fix that later tonight. Slap on Helvetica, increase the line height, maybe add some texture.” The others concurred with his assessment.

I agreed it did need some work, but I was still focused on the first thing he said: “That makes us look really bad”. He didn't have any relation to the team who put that on the screen, but he knew the style clashed with Square's crafted image of polish and perfection. He had nothing to gain from restyling the view, but still wanted go out of his way for the good of the company. Very few would ever see that monitor, and yet its imperfection put a dent in everything that Square had achieved.

Maybe I'm making a big deal out of nothing, maybe that was just his thing. But from what I've seen from Square's employees and its products, I think it runs deeper than that. It's the kind of culture that makes amazing things happen.

Square recently made two announcements: a partnership with Starbucks and a flat monthly fee for credit card charges.