Just a little over a month ago, Facebook started pushing its "X Is Like Facebook" campaign. It started with the infamous Chairs video, and they've kept it up with some other extended metaphors. Say what you want about the campaign's execution, but it's to trying something seemingly off-beat and bold in its messaging. Really, what other company has tried to explicitly associate its product with solving existential loneliness?

This is Facebook's self-description: "Facebook's mission is to give people the power to share and make the world more open and connected."

Many folks at Facebook, from top to bottom, believe that on a deep level. It's an admirable mission. But to operate, Facebook also needs to be a company. This gives it a strange identity crisis; even Zuck's letter to investors begins, "Facebook was not originally created to be a company."

This is my Newsfeed earlier today, colored red for ads and blue for non-ads. If you break red versus blue down into percentages, it's 80% ads; if you want to count the navigation bar and side-navigation, then 54% advertising. 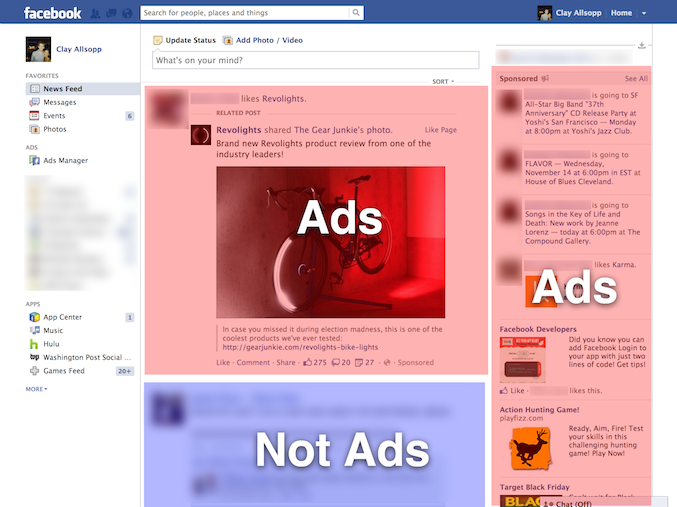 On one level, this does help me "connect" because the ads are almost always tied to one of my friends. My buddy Dylan likes Revolights; that could be insightful to me, so their sponsored story appears in my feed.

I'm not saying this is a bad way of advertising. Anecdotally, I have probably clicked or liked more things through Facebook's promoted posts than Google searches. And I think user-promoted posts are a great way for people to surface content that they care a lot about.

But really, advertising at all on Facebook leaves a funky taste in my mouth.

Facebook is ostensibly about making the world "more open and connected," but half the time I visit the site it's dominated by paid promotions. And I get it, the company needs to make money, there's nothing wrong with that in-and-of-itself.

But then Facebook creates a video about how, "[The universe] is vast, and dark, and makes us wonder if we are alone." That's a powerful statement about existence, and it comes from a tech company. But it is a company nonetheless, and at the end of the day we're being sold something.

What bothers me is how we're okay with this; that the tragedy of the video is the comical absurdity of the "Chair" analogy and not the deeper tragedy that any company is trying to connect with us like this at all. How one minute we're being pitched about Facebook addressing the human condition, and the next we're advertised to about Farmville. It's a schizophrenic experience straight out of Infinite Jest.

And you know what else? There's this meta-cognitive dissonance where I know all of this, but right after I finish writing I'm actually going to go post about it on Facebook. And if you feel like participating in the absurdity, there's also a Like button at the bottom of the page.